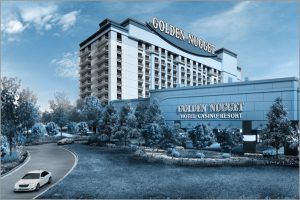 Golden Nugget Hotels & Casinos and Wind Creek Hospitality, affiliated with an Alabama Indian tribe, enter the race for a casino in Richmond, Virginia.

The Golden Nugget proposal is for a $400 million casino project about six miles from downtown and Wind Creek Hospitality proposes a $541 million project in the city’s South Side.

According to a news release, Golden Nugget’s proposal is for a 950,000-square-foot facility.

It would include a 177-room hotel with 37 suites, a 93,000-square-foot casino floor, a 16,000-square-foot event space, a 1,500-seat concert venue and at least six restaurants, including Morton’s The Steakhouse, and four retail outlets.

A pool complex would include a lazy river and cabanas. The company estimates that 1,200 jobs would be created, and completion would take about three years after approval.

Meanwhile, Wind Creek’s proposal would include 100,000 square feet of gaming space, 2,500 slot machines and 120 table games, as well as more than 500 hotel rooms in two towers.

The project also would include an entertainment center of 67,000-square-foot, as well as, a spa, indoor pool, fitness center and seven food and beverage locations.

The casino would be on two parcels on Ingram Avenue near the Oak Grove and Manchester neighborhoods in the city’s South Side, plots of 27.8 acres and 18.8 acres owned by the Richmond-based City Central LLC entity with tobacco warehouses.

The company currently owns seven other casino resorts, as well as a gaming website for the Poarch Band of Creek Indians and racetracks in Alabama and Florida.

This is the second proposal from an Indian tribe affiliate for Richmond. Virginia’s Pamunckey Indian Tribe made the first.

Meanwhile, Golden Nugget promises that if its proposal gets the vote, it would donate to several charity programs, including $60 million to Richmond Public Schools, $10 million to the Richmond Affordable Housing Trust Fund, $1 million to Virginia Union University and $30,000 to the Metropolitan Business League, a Richmond-based organization that assists local minority-owned companies.

Golden Nugget currently owns five casinos in the country. It would take part of equity ownership with 5% between two Majority Business Enterprise-certified entities in Richmond.

All the competing proposals have until Monday to be submitted, which is the official deadline. After that, the city will have to evaluate if they meet all submission criteria to take part in the race for a future casino resort in Richmond.

The evaluating panel will consist of nine members, named by Mayor Levar Stoney. They will review the proposals over the following days, assisted by the consulting firm, hired to the purposes of the project, Convergence Strategy Group.

The last word will have the City Council, the Virginia Lottery and the local voters, who will vote on a referendum in the fall. The projects need their approval to move forward.