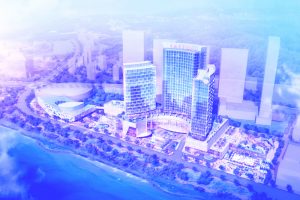 South Korea authorities have given a Chinese real estate developer a one-year deadline extension for the construction of an integrated casino resort near Incheon International Airport, the country’s busiest travel hub.

Guangzhou R&F Properties sought a permission to postpone the opening of the property by three years. According to regional news outlet GGRAsia, the company was supposed to launch phase one of the scheme in mid-March.

Aside from the one-year extension, Guangzhou was also allowed to take a stake in the planned resort that was previously held by US casino giant Caesars Entertainment, Inc. The latter company bowed out of the project last month as part of an ongoing effort to focus on growing its US operations.

To many, Caesars’ exit did not come as a big surprise. Last summer, former Eldorado Resorts closed a reverse takeover of its larger rival Caesars Entertainment Corp. The two companies’ combination created the largest US casino operator by number of properties.

The CEO of the combined group and former boss of Eldorado, Tom Reeg, had said way before the transaction closed that the opportunity would have to be “stupendous for us” to explore expansion in the region. Caesars dropped out from Japan’s casino race shortly after those comments had been made.

The Incheon resort scheme, formerly dubbed Caesars Korea, is now being promoted by R&K Korea, a subsidiary of Guangzhou. According to information provided by the Incheon Free Economic Zone Authority, the agency tasked with overseeing the project’s progress, the country’s Ministry of Culture, Sports, and Tourism would require the company to a new partner that has experience in operating casino properties.

The future resort is planned to be located on a site that Caesars purchased late in 2014. According to a website for Caesars Korea, which is no longer available, the property would feature a foreigner-only casino, a hotel with multiple rooms and suites, serviced apartments, villas, and multiple entertainment, event, retail, and food and beverage facilities.

Construction work on phase one was suspended in early 2020 due to the coronavirus outbreak. The resort was approximately 25% completed at the time.

It emerged last fall that Caesars was facing multiple delays related not just to the pandemic but also to reported disagreements between the company and its local construction partners, who demanded all outstanding funds to be fully paid and further funding for the project to be secured before construction work could resume.

Mohegan Gaming & Entertainment, the other US casino operator currently building an integrated resort in South Korea, was reported to have faced similar issues. Late last year, the company pushed back the opening of its property in the country to early 2023.