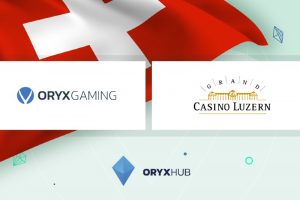 While Grand Casino Luzern is the first Swiss operator to launch ORYX content, the supplier said that it is set to soon announce more partnerships with locally licensed online casinos.

One of the largest land-based casinos in Switzerland, Grand Casino Luzern was among the first to be granted a license from local authorities to go live with online gambling. That happened in the summer of 2019, about a year after Swiss residents approved in a nationwide referendum the reorganization of the sector in a manner that permitted brick-and-mortar casinos to provide digital gaming services.

With a nearly 40% market share, mycasino.ch is a clear leader in the local iGaming space. Through its agreement with ORYX, the gaming website now provides its players with access to the entire games range of the provider’s exclusive RGS partner GAMOMAT.

GAMOMAT is a German online game development studio that focuses on the creation and delivery of “an outstanding gaming experience for slot fans”, as noted on its website. Royal Seven, Crystal Book, Take 5, and Ramses Book are just few of its popular online slots that are now live with mycasino.ch and available to Swiss players.

As mentioned above, ORYX anticipates to soon further extend its presence in the Swiss market through partnerships with other local operators. Last year, the company obtained an ISO/IEC 27001 certificate, which serves as a regulation benchmark in Switzerland.

Commenting on their Swiss debut, ORYX Managing Director Matevž Mazij said that Switzerland “is a very exciting young market” and that they are pleased to be finally live with Grand Casino Luzern.

Mr. Mazij went on to say that they “couldn’t have chosen a better partner” than the local market leader to mark the beginning of their venture into the Swiss iGaming space and that they look forward to further establishing their presence in that country and providing local players with their premium content.

Grand Casino Luzern CEO Wolfgang Bliem said that they are thrilled to now be offering GAMOMAT’s “proven content” to their players and that the integration process has gone extremely smoothly.

The casino executive went on that their business has been going from strength to strength and that this new partnership with ORYX has further improved their offering.

The deal with the Grand Casino Luzern is the latest in a series of agreements that have helped the major provider extend its footprint in existing markets and enter new ones. ORYX has recently announced content supply partnerships with operators in Croatia, Romania, Greece, Spain, Portugal, the Netherlands, and the US, among others.