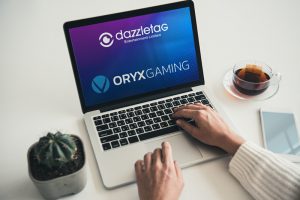 Founded in 2010 and headquartered in Malta, Dazzletag currently runs a range of casino and bingo sites. It operates its digital gaming venues via its proprietary platform.

Under the terms of the operator’s recent deal with ORYX, the provider will initially roll out its exclusive RGS content, which includes a mix of classic and modern titles, with Dazzletag’s Malta-licensed brands, including FruitKings, Play Sunny, and My Jackpot Casino. The games will be launched with the company’s UK-facing operations at a later stage.

The games will be delivered exclusively via Microgaming’s platform. ORYX and Microgaming first announced their partnership in October 2020. Under their agreement’s terms, the former provider was able to integrate its content onto the latter’s award-winning aggregator. ORYX joined hundreds of other content makers and suppliers and gained access to an ever-growing number of operators working with Microgaming.

Commenting on their partnership with Dazzletag, ORYX Managing Director Matevž Mazij said that they are excited to go live with the operator and its popular brands and to work together in a number of markets.

Mr. Mazij went on to say that their content fits nicely into their partner’s existing offering and that they are certain this new partnership will be a success thanks to Dazzletag’s innovative approach and a “player focus similar to our own.”

Dazzletag Casino Manager Jordan Rosamund said that ORYX’s exclusive RGS offering provides “unique and varied” titles including both classic games and ones with innovative mechanics and features that they are certain will resonate well with their players.

Microgaming Director of Aggregation Graeme Powrie said that they are delighted to support ORYX and its new operator partner in this exclusive supply deal. Mr. Powrie went on to say that this partnership highlights Microgaming’s focus on “creating unique opportunities for our partners and customers.”

Dazzletag is the latest operator ORYX has aligned with in recent weeks. Earlier this week, the company announced a content delivery deal with Switzerland’s Grand Casino Baden. It signed a similar partnership earlier in March with Grand Casino Luzern to mark its debut in the Swiss regulated iGaming space.

It was in March again when ORYX announced that it would supply its exclusive RGS content as well as titles from third-party partners to Premier Gaming’s online casino brands.