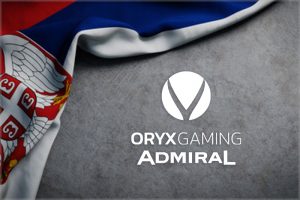 Online casino games supplier ORYX Gaming has launched its ORYX Hub content with AdmiralBet in Serbia to significantly enhance the operator’s existing offering and strengthen its own presence in that market.

Following a successful integration, ORYX announced Tuesday that AdmiralBet and its Serbian players have gained access to ORYX Hub’s massive and diverse games library, which includes, among multiple other products, exclusive and localized titles from RGS partners like GAMOMAT, Peter & Sons, CandleBets, Kalamba, and more.

AdmiralBet has further been provided with access to and can utilize ORYX’s suite of player engagement tools, including real-time leaderboards, free game rounds, achievements, and quests. All these have been built and proven to drive player engagement, conversion, retention, loyalty, and value.

AdmiralBet is part of the larger NOVOMATIC Group. The operator is among the leaders in the provision of online casino services in the Serbian market. Its integration with ORYX in Serbia marks a significant expansion of its existing partnership with the leading content provider. ORYX already supplies its in-house and aggregated products to NOVOMATIC’s brands in Germany and Croatia.

Thrilled to Go Live in Serbia

Commenting on their further expansion in Serbia, Chris Looney, CCO at ORYX’s parent company, Bragg Gaming Group, said that they are thrilled to have taken their ORYX Hub content live with AdmiralBet.

He went on to note that their games have resonated well with Serbian players since they first entered that market and that this partnership is a “testament to the appeal of our offering with the local audience.”

ORYX debuted its products in Serbia back in 2017. The supplier has since then teamed up with multiple locally licensed operators, including Mozzart Bet and Top Bet.

ORYX is currently licensed by the Malta Gaming Authority and is certified or licensed to provide its products in 18 major regulated jurisdictions. The company recently obtained an ISO/IEC 27001 certificate, an achievement that demonstrates its commitment to information security.

Of taking ORYX Hub content live in Serbia, AdmiralBet Head of Business Development Bojan Kesić said that the aggregator’s offering is impressive and that with such a wide selection of titles on offer, their players will certainly find their own favorites no matter their preference in themes, mechanics, features, or volatility.

Mr. Kesić also pointed out that the addition of ORYX’s proprietary and aggregated content has significantly strengthened their online casino offering in Serbia.