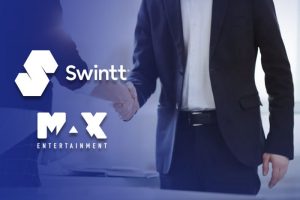 Young games developer Swintt has partnered with online casino operator Max Entertainment to provide it with access to its portfolio of titles.

As part of the deal, the studio’s entire suite of online slots will soon become available to players at Max Entertainment’s Slotty Vegas and GoSlotty iGaming brands in all Malta jurisdictions.

The agreement covers popular Swintt games such as Book of the West and Sea Raiders as well as recently released Lone Rider XtraWays. This newly released game is the first one ever to feature the developer’s brand new XtraWays mechanic. The powerful engine increases the win potential in every spin.

Launched in 2019, Swintt is a Malta-based studio that specializes in the development of iGaming content and its localization for growth markets and for matching different player requirements and preferences in each of this markets. The company boasts extensive range of games, including content that was originally made popular at land-based casinos across Central European markets.

Swintt is licensed and regulated by the Malta Gaming Authority.

News about the studio’s partnership with Max Entertainment emerge shortly after it announced a similar content supply agreement with online casino platform provider Soft2Bet that will see it roll out its titles across more than 10 iGaming brands.

Integration Comes at an Exciting Time

The integration of Swintt’s content with Max Entertainment’s brand comes at a particularly exciting time for the operator’s Slotty Vegas operation, which is currently undergoing a revamp that will see the launch of a new site and environment for its players and will take customer experience to the next level.

Swintt’s online slots will become part of a games lobby of more than 3,000 online slots and table games offered by Slotty Vegas.

Of their partnership with Max Entertainment, Swintt CCO David Mann said that they are thrilled to add the operator to their growing lineup of big-name partners. He went on to note that its partner’s two brands are “hugely popular” and that they believe their players will love the studio’s portfolio of games.

Mr. Mann also noted that each of their titles “has been localized for the specific market in which it is being offered” so that it delivers an experience that “not only meets but exceeds player expectations.”

Max Entertainment Head of Casino Yaroslav Tabaliuk said that they have put content at the heart of their online casinos and “that is why we go to great lengths to partner with the most in-demand providers in the market.”

He further noted that the addition of Swintt’s content to their already hefty portfolio was “a no-brainer” as the studio’s titles have been topping charts around the world. According to Mr. Tabaliuk, this new partnership adds variety and quality to the game lobbies of their two brands, allowing them to stand out from their rivals and “deliver the best online casino environment to our players.”