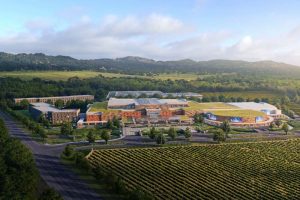 A Northern California tribe plans to build a $600 million hotel and casino resort on old wine land in Sonoma County as it looks to preserve its “cultural and historic integrity and secure a brighter future for coming generations.”

The Koi Nation, a federally recognized tribe of the southeastern Pomo people, on Wednesday announced that it has purchased a 68-acre site north of Santa Rosa to reestablish its tribal land base and develop a casino-hotel complex that will further expand Northern California’s casino market.

The tribe paid $12.3 million for the former winery that is located about 10 miles from its historic lands. Tribal officials on Wednesday submitted plans to place the 68-acre plot in federal trust.

The tribe’s proposal calls for the development of the 1.2-million-square-foot Shiloh Resort & Casino. The complex will feature a casino with 2,500 slot and other gaming machines, a 200-room hotel, six restaurants and food service areas, a meeting center, and a spa. The proposed casino resort will be the third of this kind in Sonoma County.

The Koi Nation will be the project’s developer. Tribal officials said Wednesday that they are also in talks with potential investors and partners.

The tribe will have to negotiate a gaming agreement with California Governor Gavin Newsom. The deal will also need to be ratified by the state Legislature and then be approved by the US Department of the Interior.

As mentioned above, the Koi Nation has already filed to place the land in trust and make it eligible for gaming under the Indian Gaming Regulatory Act. The approval process includes an environmental review and a public comment period which is set to begin in 60 to 90 days.

The tribe said that the revenue from its proposed casino resort will help it become economically independent. The future complex will contribute some of its revenue to local communities, it also became known. Tribal officials said that they are working closely with local governments and broader community members to “address their needs.”

The future resort will offer more than 1,100 full-time job positions. The Koi Nation said that it expects construction to kick off in one to two years. It will take another two years until the proposed complex is fully developed and ready to open doors for guests and visitors.

The Koi Nation originally lived on an island in Clear Lake. Its land was seized in the 1870s and the tribe has been displaced to multiple communities over the years.

It regained its recognition and rights as a tribal entity in 2019. Tribal officials said Wednesday that they are now confident the Sonoma County community will support them as they seek to restore their independence and exercise their rights as Native Americans.